Dear Evan Hansen, an award winning musical, recently released a movie adaptation. With a 31% on Rotten Tomatoes yet a rating of 4 out of 5 stars on google reviews, there are mixed opinions on the transfer to a new medium. Although overall, the negative aspects seem to outweigh the good.

The musical is centered around a dark subject matter. When the main character, Evan Hansen, an anxious high-school loner, finds himself doing a writing exercise through writing a letter to himself, it sends him down a troubling path. A troubled kid and the brother of Evan’s crush, Connor Murphy, ends up committing, with the letter Evan wrote being the only thing left on him. Evan gets trapped with Connor Murphy’s desperate parents believing he was their son’s “best friend,” only to play into it to get what he’s always wanted: a loving family and the girl of his dreams.

No one in this story is a good person, and that’s the point. Connor Murphy’s parents tried to get Connor help when he started showing signs of being mentally unwell, but never tried hard enough and eventually gave up on him, letting their son tumble further into illness. From this illness, Connor ended up being violently angry and lashed out. After Connor’s death, his parents began treating Evan like a replacement son, letting Evan exploit them as well to fill in for his workaholic mom and absent father. Evan spins a string of lies, and then quickly finds out how big of a hole he dug for himself. Despite all of these characters doing bad things, it is wholefully acknowledged in the musical that Evan is the main villain of the story.

Yet in the movie, four of the songs which not only were fan favorites, but are nearly essential to the plot, were removed. These songs capture some of the most important moments that put Evan in a negative light. Taking them out would do no other than make watchers sympathize with him. The songs removed include, “Anybody Have A Map,” “To Break In A Glove,” “Disappear,” and “Good For You.” The first and last song removed were the ones to get the most outrage, with ‘Anybody Have A Map’ being the opening song to the musical, and ‘Good For You’ being a climax to the 2nd act. ‘Anybody Have A Map’ focuses on the flaws of Connor and Evan’s characters, and their relationship with their parents before the conflict even begins. After the conflict however, ‘Good For You’ is the moment where Evan realizes the full extent of his lies on innocent people around him, and when Evan begins to feel guilt for it. It’s a moment that doesn’t really exist in the movie, cutting out any outside perspectives on how Hansen’s actions impacted other characters.

On top of that, the empty spaces where songs were taken out had been replaced by poor dialogue. The scenes were skipped over and fell very flat. When the songs that were included started, they seemed incredibly out of place and jarring. The dark subject made the musical numbers almost humorous when paired with the overexaggerated stage acting of Ben Platt, the original actor for Evan Hansen, who people had criticized for looking too mature to play the role of a high schooler. On the bright side, at least they included most of the other original cast members from the musical in the movie, dodging a mistake which many movie adaptations have made.

In conclusion, there are many faults to this movie, and it is advised that you see the show or at least read the book first. There is no chance this movie is good, and in the general opinion, the story worked better as a stage performance. Luckily, tickets to the musical are selling once again as Dear Evan Hansen comes back to Broadway in December. 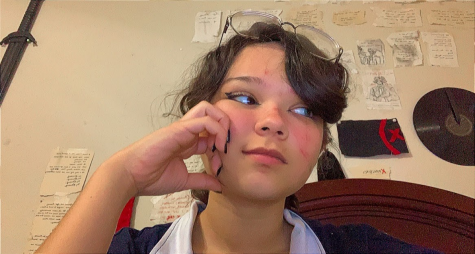 Hi, I’m Camryn and I’m a sophomore this year. This is my first year on the Trailblazer staff as a writer, and I’m very excited to be here! I love...