The normalization of sleep deprivation may have more detrimental effects on students than previously thought. 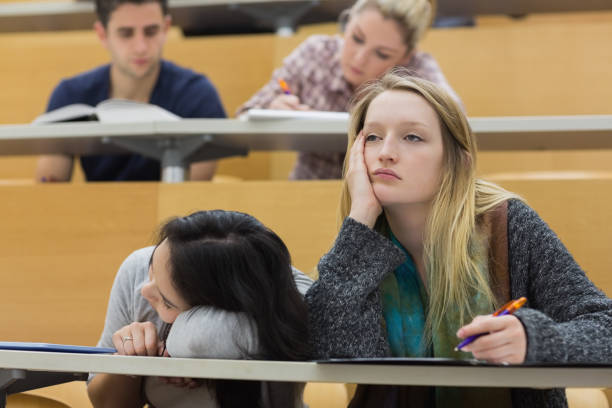 According to a 2006 study by the National Sleep Foundation, 87% of all high school students get less than 8-10 hours of sleep per night, with actual hours received decreasing as years go by. Considering most teens in the newest generation are growing up chronically sleep deprived and struggling with sleep disorders like insomnia, their academic performances, motor skills and mental health are at risk.

“Among [college] students carrying a full course load, those reporting poor sleep quality performed less well on academic measures than those reporting a better quality of sleep,” researchers at Grant MacEwan College, Andrew J Howell, PhD, Jesse C. Jahrig and Russell A. Powel, reported while they sought to find a correlation between lack of sleep and student performance.

Sleep deprivation and daytime drowsiness decrease alertness and in turn, performance. A student cannot take a test at their full potential if they are overwhelmed by how tired they are. The study also commented that  high school students who lack sufficient sleep experienced  depressed moods and lower grades.

Lack of sleep has also been connected to mental health problems, such as susceptibility to suicidal thoughts. Many teens are already at risk for this, with death by suicide being the third most common cause of casualties among 15-24 year olds, confirmed by those at the Colorado Behavioral Healthcare Counsil. On top of that, for those with mood disorders, symptoms are prone to worsen.

“Sleep helps regulate emotions and any disturbances to it may lower the threshold for suicidal behaviors among at-risk individuals,” clinical psychologist and assistant professor, Rebecca Bernert, PhD, said. “[Sleep deprivation] can make people more receptive to negative emotional information, which they might shrug off if they were fully rested.”

Along with academic performance and mental health being attacked, basic functioning and motor skills are also threatened. As a result, so is driving. The National Highway Traffic Safety Administration announced that drowsy driving causes around 100 thousand accidents each year, and young drivers are behind the wheel for more than half of them. Considering how many students abandon the bus to drive to school, sufficient sleep is vital to prevent crashes in the parking lot.

The risks of poor sleep for teens are too detrimental to ignore. The stereotypical “moody teen” behavior is also likely caused by lack of sleep, as anger, irritability, sadness and overall negativity are increased without the full rest teens need. Luckily, there is a rather simple solution that is already being implemented worldwide: starting school later. Starting school at a later time in the day will create more time dedicated to sleep, as most insomniacs take about two or more hours to fall asleep. Setting back the school start time by even 30 minutes would create more time for teens to actually sleep and would produce more alert, aware and engaged students.

In conclusion, students deserve more sleep, and the lack of it is causing more than temperment issues. It’s affecting their grades, their mental health and their driving abilities. If schools want students to succeed in their educational endeavors, they should set their starting times back.