An Inside Look into Judge Ketanji Brown Jackson’s Confirmation Hearings 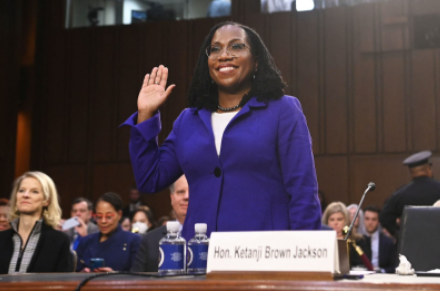 US Supreme Court nominee Judge Ketanji Jackson introduces herself to the Judiciary Committee and recites the Oath of Truth on her first day of confirmation hearings.

“During this process, you look for someone who, like Justice Breyer, has a pragmatic understanding that the law must work for the American people,” President Biden said during the announcement of Judge Jackson’s nomination. “Someone who has a historical perspective to understand that the Constitution is a resilient charter of liberty. Someone with the wisdom to appreciate that the Constitution protects certain unalienable rights, rights that fall within the most fundamental personal freedoms that our society recognizes. Judge Jackson is just that.”

“Members of this Committee: If I am confirmed, I commit to you that I will work productively to support and defend the Constitution and the grand experiment of American democracy that has endured over these past 246 years,” Judge Jackson said. “During this hearing, I hope that you will see how much I love our country and the Constitution, and the rights that make us free. Thank you for this historic chance to join the highest Court, to work with brilliant colleagues, to inspire future generations, and to ensure liberty and justice for all.”

During their introductions on the first day, various Republican senators expressed their desire to make the confirmation hearings “unproblematic” and “fair.” One of these people was South Carolina Senator Lindsey Graham, who specifically said he didn’t want to repeat the events from past nominee hearings, such as Supreme Court Associate Justice Brett Kavanaugh’s confirmation experience.

“The hearings are going to be challenging for you, but informative for the public and respectful by us,” Senator Graham said. “I hope we can meet that criteria. It won’t be a circus, so we’re off to a good start. Most of us couldn’t get back to our offices during the Kavanaugh hearing without getting spit on. I hope that doesn’t happen to anyone here and I don’t think it will. It’s not going to fly with us. We’re used to it by now, so it’s not going to matter a bit to any of us. We’re going to ask you what we think we need to be asking. President Biden had a choice here [to nominate a Justice] and he has every right to make it, because elections have consequences.”

During the second day of confirmation hearings, Republican senators asked Judge Jackson questions about her stance on transgender and abortion rights. Others, such as Texas Senator Ted Cruz, were concerned about the influence of race in Judge Jackson’s previous rulings. During his line of questioning, Senator Cruz showed a series of children’s books to Judge Jackson about Critical Race Theory that were being taught in Georgetown Day School. He then proceeded to ask Judge Jackson whether or not she believed this content should be taught in educational institutions, due to her role on an anti-racist school board.

“Senator, I do not believe any child should be made to feel as though they are racist, though they are not valued or though they are less than that,” Judge Jackson said. “I don’t believe in any of that. I don’t know [if Critical Race Theory is taught in Georgetown Day School] because the board does not control the curriculum. That’s not what we do.”

On that same day, Democratic senators expressed interest in Judge Jackson’s interpretation of the U.S. Constitution and the law as a whole. Chair of the Senate Judiciary Committee, Dick Durbin, specifically asked about her judicial philosophy.

“Over the course of my life on the bench, I have developed a methodology that I use in order to ensure I’m ruling impartially and that I’m adhering to the limits of my judicial authority,” Judge Jackson said. “I essentially follow three steps. The first step is when I get a case, I ensure that I am proceeding from a position of neutrality. This means that I’m clearing my mind of any preconceived notions about how the case might come out and setting aside any personal views. The second step is I am able to receive all of the appropriate inputs for the case. This includes the party’s arguments and the factual records. Then the third step is the interpretation and application of the law to the facts in the case. This is where I’m really observing the constraints on my judicial authority.”

During the third day of confirmation hearings, Democratic senators praised Judge Jackson’s work, responses and resilience during the hearings. At the end of the hearing and in his final statement, Chairman Durbin thanked those who were respectful towards the nominee during their times of questioning. However, he expressed disappointment in those who did the contrary.

“My colleagues promised a fair and respectful hearing,” Chairman Durbin said. “Most, including my Republican colleague Senator Grassley, followed that admonition. However, there were a few obvious glaring exceptions. I’m sorry for that Judge Jackson. Your patience, dignity and grace in the face of what was frankly some offensive treatment, is a real testament to your judicial temperament.”

Even though Chairman Durbin expressed his dislike towards the way Judge Jackson was treated by some members of the committee, he still believed she’ll be confirmed on the Supreme Court. He spoke to the nominee’s daughter, Leila Jackson, and outlined that her mother’s presence and character during the hearings merited her a spot on the court.

“You got a great mom,” Chairman Durbin said. “What she’s been through in the last couple of days, most people would not even consider going through for one minute. However, she’s caring, strong and kind. You’re lucky to have her and we’re going to be lucky to have her on the Supreme Court.”

Prior to the end of the third day of confirmation hearings, Democratic Senator Cory Booker from New Jersey, spoke about the historical significance of Judge Jackson’s nomination. He also refuted negative allegations about her past court rulings, merits and character.

“You did not get [to the confirmation hearings] because of some left wing agenda,” Senator Booker said. “You didn’t get here because of some dark money groups. You got here how every Black woman in America has gotten anywhere. You’re a person that is so much more than your race and gender. You have earned this spot. You are worthy. You are a great American. They’re going to accuse you of this and that, but don’t worry. God has got you. How do I know that? Because you’re here.”