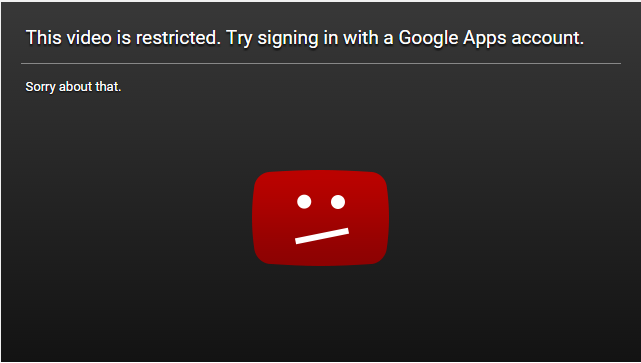 Recently, the District decided to implement the use of YouTube at elementary school campuses. This feature has been prevalent in high school campuses, but the District worried about letting younger students surf the web without a filter (to prevent our innocent kiddos from being scarred). In order to combat this concern, the District banned most of the videos on YouTube for all grade levels. Now YouTube is a safe place used only for education, or staring at a “Video Restricted” message. This censorship of information should not exist in an educational system.

Censorship in Round Rock schools is not unheard of. In 2008, a student’s parents created a petition to remove the book TTYL by Lauren Miracle due to “sexual content.” Instead of going through the district’s review process, former Superintendent Jesus Chavez banned the book from all RRISD middle schools. In his letter to the parents who challenged the book, Dr. Chavez stated that “[b]ecause I have instructed that the book be removed from middle school libraries, there is no further issue to be considered by the Board of Trustees and the scheduled appeal for reconsideration of instructional materials is moot.” The National Coalition Against Censorship picked up the case and wrote a letter to the board of education and the Austin American Statesman newspaper asking the ban be removed.

Since YouTube videos don’t come with a system of ratings, the District simply blocked all content from students except a small portion of pre-approved videos. Teachers, of course, are allowed full access to browse YouTube. But if they would like to make a video available to students, they must get it verified by the campus’ Instructional Technology Specialist (ITS). This process can be carried out by students as well. Videos are watched to make sure they are appropriate in an educational setting and then either approved or denied.

While this process is restrictive to start with, the system presents a flaw. Once a video is approved, it is available to students of all grade levels within RRISD. This means if a video is approved for a class of seniors, it can be watched by a first grader. While some think this would not be a problem, many believe the youth’s innocence has to be protected. It is futile to believe that children will never be exposed to more mature content; but the District, like putting down a stick to dam a river, has decided to become the vanguard of ignorance to the more mature aspects of life.

We cannot put a button on the human experience. Books such as 1984, Brave New World and Fahrenheit 451 warn us against accepting censorship. The District would be put to shame by the very authors they write into curricula. If there is anything our District-approved history classes have taught us, it is that those who have censored content have usually been on the wrong side of history.