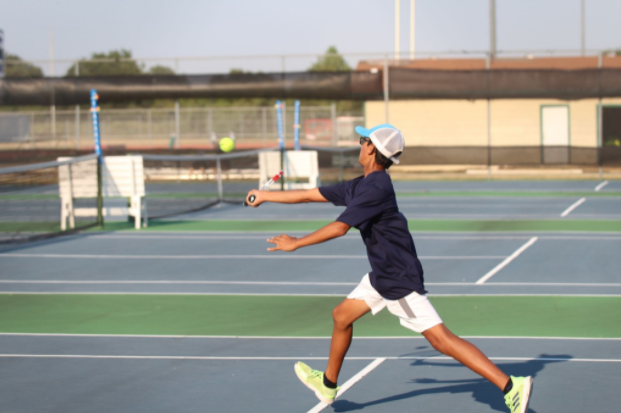 Shaunak Gadgil volleys at the service line against Hutto at the match on Thursday.

Players paced, the team gathered and coaches gave advice before the JV tennis match last Thursday. As the team prepared to take on Hutto, players wrestled with both nerves and excitement.

“I’m very nervous,” freshman Soyoung Cho said. The match last Thursday was only her third with the team. “I don’t have much experience.”

Aside from her fresh eyes on the sport, Cho had another reason to be nervous. It would be a player from Hutto’s varsity team making an appearance across the court from her.

“I haven’t played their varsity before so I don’t know how good they are,” sophomore Shaunak Gadgil said. “But I’m not intimidated.”

“I think our JV definitely is one of the most talented in the district, even when we compare it to Westwood and to Round Rock,” Bush said. “I have no fear we can take on a varsity team like Hutto and we can come out on top.”

At the time of the Hutto match, Gadgil was entering the beginning of his second year on the team. Still, Gadgil noted that he understood the feeling of being nervous prior to matches.

“Sometimes it happens, sometimes it doesn’t,” Gadgil said. “I try not to think about it. I try to just continue playing.”

As the Hutto players warmed up, the Mavericks gathered beside the courts, coming together for one last powwow. Shouts came from inside the huddle – “Mavs on three!” they chanted.

“We do a pep talk before the game, a humongous chant,” junior Meghana Potukuchi said. “It hypes us up, we feel powerful and we get really loud and excited.”

The Mavericks left the match with an 18-1 win. The tennis team continues to move on to bigger things. Friday, Sept. 17, varsity will compete against Westwood, one of the best tennis high schools in Texas.

“It went pretty well for the team overall and I felt pretty good when playing,” Gadgil said after the match. “The outcome was what I wanted it to be.”