‘Kids of Appetite’ should be your next fall read 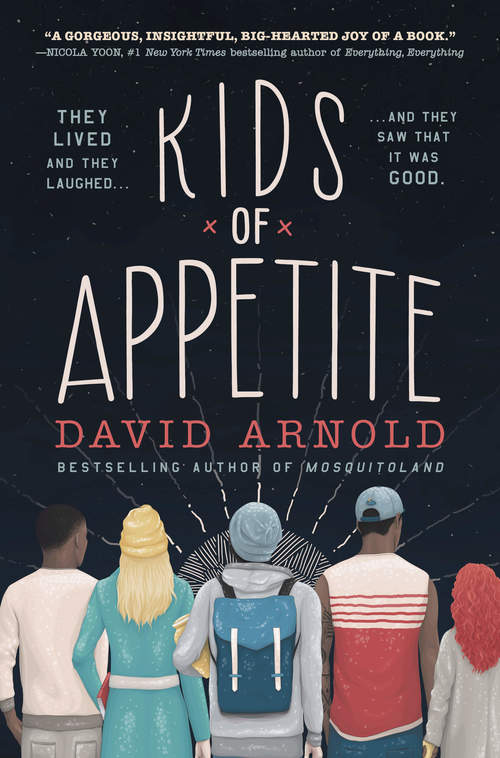 Kids of Appetite is the second novel by David Arnold, who first wrote Mosquitoland, and it opens with a murder investigation.

Yes, there is murder in the book.

But the investigation of the murder of Mad’s uncle is merely the setting for the real story, told in alternating points of view, to unfold about the two main characters, Vic and Mad.

Vic – a 16 year old with Moebius Syndrome, a rare neurological disorder that causes facial paralysis – is still struggling with the fact that everyone but him has moved on from his father’s death two years ago.

With an affinity for visually striking language and a classical taste in music and art, Vic applies his love of art to the people around him as his continual references to Henri Matisse and opera reveal an upbringing appreciative of the arts. Yet that cultivated love serves to alienate him from his mother and her boyfriend and his two sons, causing him to remain an outsider within his own home. Vic’s mom is trying, and mostly succeeding, to move on from his father’s death, but Vic isn’t ready yet, so he embarks on the spontaneous journey to spread his father’s ashes in the places that meant the most to him.

Except, he’s not alone in the journey.

Here is where Mad and the non-violent gang that’s really more of a haphazard family, the Kids of Appetite, enter. The leader of the motley group is 27-year-old Baz, accompanied by his silent, finger-snapping brother, an ice-cream obsessed 11 year old, and Mad, who lives with her grandmother and abusive uncle. Mad is waiting until she turns 18 and can escape her uncle with her grandmother in tow. She’s always reading The Outsiders, a clear inspiration for the book’s characters and themes, and is the first to approach Vic, who is continually being avoided and stared at as a result of not being able to smile and blink.

Vic joins the Kids of Appetite and they assist him on the difficult task of decoding his father’s list of meaningful places to spread his ashes. In the process, he and Mad fall in love. It’s the natural meeting of two halves coming together, instantly being bonded by that internal connection that builds and builds throughout the novel.

Throughout the book, Vic’s and Mad’s chapters intersect with each character’s unique use of language which is another tool in their characterization. Vic refers to people as Super Racehorses and lists all the mundane actions of girls, such as drinking tea, reading, and even riding bikes, that make him fall in love with them. He reveals quite early that he has fallen in love a thousand times, already making a spot for himself as one of the countless boys who is always falling in love and yet has never been in love.

Mad, on the other hand, has the Kids of Appetite who provide her with the kind of familial love she lacks and which Vic also is found wanting. She is the kind of character who has all their barriers thrown up against the world, in order to protect the threatened vulnerability and sensitivity within them, and yet they’re all torn down by the introduction of Vic.

The characters in the novel all possess interests and physicalities about them that serve to form the basis of their character. You get the idea that all the obsessions and strange habits and eccentric vocabulary that surround the Kids of Appetite, Vic, and the rest of the supporting cast are necessary to their survival in the world and their place within it.

As the novel opens, the introduction to the events start in reverse. The end is the beginning. Even though Vic is a new character, you feel as if you know him and the characters already and the murder investigation is the eventual end to wrap up all the other events. And yet it’s quite the opposite and employs the age old trick of enticing the reader into wanting to read what happens next by giving the end away.

Kids of Appetite, at first glance, is chock full of exciting and unorthodox formatting that follows the ebb and flow of the group’s story. Unusual and eccentric language unique to the characters is an obvious effort to set them apart from the world, and yet it also helps form a story about death and how it will never fade away, about all the types of love that can be experienced, about one’s struggle to find their place within society, and finally about how family can transcend boundaries and backgrounds, coming together against all odds.

‘Kids of Appetite’ should be your next fall read