How’s everyone doing with 5 weeks until the playoffs?

A lot has happened since week 8, so let’s get right into it. Week 13 wrapped up Monday night when the Tennessee Titans lost 17-34 to the Houston Texans on Monday Night Football (MNF).

Los Angeles Rams (10-1)- Welp the undefeated have been defeated. In week 9 the Saints defeated the Rams to show that they simply had the better team. Los Angeles had a weak schedule this season with their only three ‘real’ opponents being the Saints, the Kansas City Chiefs, and now the Chicago Bears. The Prime Time 54-51 MNF win against the Chiefs ended up being the third highest scoring NFL game ever, with 105 total points being scored and the first game in NFL History in which both teams scored 50 or more points. LA continues to power through opponents and will play the Detroit Lions and Bears the next two weeks, in which I see the Bears as the only team with a chance of stopping the almost unstoppable Rams.

Cleveland Browns (4-6-1)- This season is not quite done for Cleveland. They are coming off a two-game-winning-streak which included a victory over their division rival, and new home of previous Head Coach Hue Jackson, the Cincinnati Bengals. The Browns last 5 are games that, if they play well, they could finish with a 9-6-1 record and take the Wild Card. It would definitely be a great accomplishment for the Browns that went 0-16 the season before. Good luck to the Browns the rest of the Season.

Chicago Bears (8-3)- Playoff hopes are more than still alive in Chicago. The Bears have been guaranteed a non-losing season (The worst possible record they can finish with is 8-8) and with the now Number 1 defence in the league, two prime-time victories in a row, a five game winning streak, and a victory over the Minnesota Vikings, whom they haven’t beat since week 8 of the 2016 season, the Bears are on FIRE. Chi is on track to claim their First NFC North Title since 2010 and make the playoffs for the first time since that same season. Next up: New York Giants and LA Rams.

Dallas Cowboys (7-5)- After Dallas lost in prime time to the Tennessee Titans, I honestly thought their season was over, but they turned themselves around and now, in my opinion, have the best shot at winning NFC East. The Redskins had their QB injured, the aging Eli Manning can’t do anything for the Giants, and the Eagles don’t seem to know how to play Football despite the Super Bowl Win just the previous season. And now with the stunning upset in the Thursday Night Prime time game against the Saints, the Cowboys look like a decent playoff team.

New Orleans Saints (10-2)- The Saints were rolling, having extended their winning streak to 10 games after the week 1 defeat from the Tampa bay Buccaneers, until it was ended on a TNF Prime time upset from the 6-5 Dallas Cowboys. Not sure how many of you watched that game, but if you didn’t: The Saints defense played like dog crap. They couldn’t even stop the mediocre Dallas offense that hasn’t been making any ‘big’ plays this season. The NOLO defense couldn’t do anything against Dak’s offense as he was 24/28 for 248 yards and a touchdown. Whereas the Cowboys defense managed to hold Drew Brees to a crap game of 18/28 for 127 yards 1 touchdown and 1 interception. Despite this, the defendant highlight of the season came when they defeated the 8-0 Los Angeles Rams in week 9. The Saints have one of the best chances in the NFC at winning the Super Bowl. Drew Brees was doing good up until the Cowboys game. He is however nearing breaking the passing Touchdowns Record (he is currently at 517, Peyton Manning holds the record at 539).

Oakland Raiders (2-9)- The only good thing that will come out of this Oakland season is a high Draft Pick. The Raiders already hold Two Additional First Rounders as a result of the Khalil Mack & Amari Cooper trades and a top 3 pick in addition to the other two could give the Raiders a great advantage in the 2019 draft. The 2-9 Raiders are absolutely terrible, despite having a team that were playoff contenders in April. They now can not, in no way, have a winning season. The poor Raiders have only scored a combined 187 points versus the whopping 327 points that have been scored against them, which might be added, is the second most in the League only ahead of the 338 points that have been scored against the Tampa Bay Buccaneers. To crap on the city of Oakland even more, this is most likely the last season the team will remain in the Bay Area, as they will most likely move to Las Vegas in the offseason (Despite their new stadium not being done, they will be playing at UNLV’s (University of Nevada Las Vegas) Sam Boyd Stadium). And don’t worry Raiders Fans; you only have 9 more years of Head Coach Jon Gruden!!!

Houston Texans (8-3)- Despite starting the Season 0-3, The Texans have won 8 straight and are now one of the top AFC Teams, sitting in Third place. The Texans do have a pretty weak schedule, based on how their opponents are currently doing, and they’re taking advantage of it. A highlight would have to be a Victory of the AFC Super Bowl Runner Ups from 2017, the Jacksonville Jaguars, whom are suffering the same fate as the Eagles; They don’t seem to know how to play football. In addition to the Weak Colts and Weaker Titans, I’m 99% sure the Texans will be making a cameo this January in the AFC Playoffs.

Kansas City Chiefs (9-2)- The Chiefs entered their week 12 Bye with this record, and coming off the loss against the Rams. Quarterback Patrick Mahomes and Co. put up a fight against the 9-1 rams, Racking up 51 points, but lost to the equivalent of a field goal (3 points). It was one of the most impressive Prime Time games we as fans have seen in awhile. A solid match-up between the leagues top offenses. A hard loss, but a good fight indeed. We will definitely be seeing the Chiefs in January, and possibly even the Super Bowl.

How the Superbowl May look- 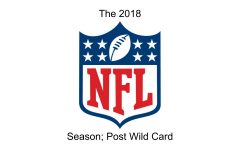