Dzhokhar Tsarnaev’s (the Boston bomber) sentence was overturned by the United States 1st Circuit Court of Appeals and will face resentencing. More recently Scott Peterson who was convicted of murdering his wife and unborn son, had his death sentence also overturned.

‘‘Honestly I don’t know too much about the situation,’’ sophomore Elijah Folin said.‘‘But I believe that if you make the decision to commit homicide then you no longer have the right to live.’’

On Monday, April 15, 2013, two pressure cooker bombs had been detonated seconds apart at 2:49 PM on Boylston Street near the finish line of the Boston marathon. Three people had been murdered and 260 injured. Three days later the perpetrators of the attack, Dzhokhar and Tamerlan Tsarnaev shot and killed a Massachusetts Institute of Technology police officer named Sean Collier. The pair then stole an SUV. The police eventually tracked them down and when they attempted to arrest them a gun fight broke out. Dzhokhar threw explosives at police and when the police subdued his brother, he took the SUV and drove at them and fled the car. Tamerlan later died from his injuries. Hours later Dzhokhar was spotted inside a boat and was apprehended. A note was found inside the boat, “Basically, the note says…the bombings were retribution for the U.S. crimes against Muslims in places like Iraq and Afghanistan and that the victims of the Boston bombing were ‘collateral damage,’ the same way innocent victims have been collateral damage in U.S. wars around the world,” John Miller, a senior correspondent of CBS news and Deputy Commissioner of Intelligence and CounterTerrorism of the NYPD, stated.

But we need to take time to pay our respects to the four people killed in these horrendous attacks. Many of these attacks such as Columbine, the Oklahoma City Bombing, 9/11 and the Charleston church shooting were motivated by hatred just like this one.

About the Writer
Casey Watson, Reporter

I'm Casey Watson. I'm a sophomore and I've been involved in debate since last year. I chose Journalism because I'm very opinionated and I like writing.... 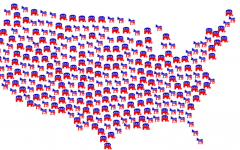